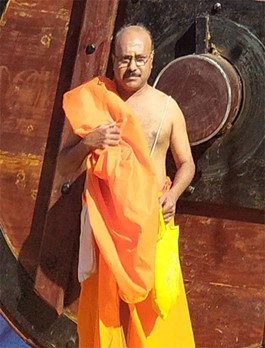 Shashi is a Brahmin, from the acharya, or priestly varna, class of Hindus. Some of his relatives are still serving in temples where they perform holy rituals and metaphysical activities and take care of the spiritual needs of followers. He believes that nature is sacred and that the natural cycles of birth, growth, marriage, children, family, and death observed in the world around us carry profoundly spiritual meanings.

His roots have motivated him to seek deeper meanings in the rituals that Hindus practice, and he tries to find answers to understand why elaborate sequences of rites are followed, the meaning and significance of oblations and offerings to gods during the rituals and pujas.

Hinduism is not a religion but a philosophy about spirituality. It is a vast ocean of various practices, many of which have inspired pagan practices across the world. We believe that every object, living or inanimate, has a being that dwells inside and that can be turned into good or evil. The misuse of spells, chants can turn even a deer into a raging animal, and hence, this esoteric power must be used for good. We believe that all objects, such as a home, plot of land, stones, trees, flowers, water, air, earth, and fire, have a cosmic energy that can be channeled to help a person flourish. This inherent divinity is imbued in the object, and pujas, rituals, and pagan practices can assist a person in harmonizing the natural energies for well-being.

Why Metaphysical Times?
My objective in being a part of the channel is to inform our readers of the vast potential available in everyday objects.
I am a proponent for the propagation of natural and cosmic forces that can be released by following rituals and mantras or chants.

I was initiated formally as a Brahmin when I was seven years old through the Upanayana ceremony and have been a writer for Metaphysical Times for about a year. We were born as Brahmins. My ancestors were Brahmins, and all our descendants became Brahmins by birth.

What purpose does filling that role give you in your life? This role keeps me spiritually fulfilled and connects me to my roots. I have engineering and an MBA degree, worked for many international firms. However, my soul and rigor are to practice and follow the spiritual tenets.

How does serving this role connect you with the pagan/metaphysical community? Hinduism and Brahmanism are a series of metaphysical activities that link the soul with the wheel of life. At first blush, Hinduism conforms to paganism. We have female and male practitioners. We worship many gods and see divinity in various objects on earth and in the cosmos. Many heavenly bodies have the names of ascetics and rishis, and we are not against or hate any entity. The Pagan form of belief uses English-sounding names while we use Sanskrit names. Hinduism freely accepts people of all ethnicities, skin color, and gender orientation. Transgender people who are victimized in Christian society are revered as a manifestation of the great warrior Arjuna, who became one during the 13 years of exile. Only karma, the sum of a person’s actions in this and previous states of existence, determines their fate. A pauper will become a king, and a king will become a pauper, since these are temporal things that change. Only karma, good or bad deeds, remains.

Blurb: We live in a troubled society rifted by divisions of wealth, gender, and ethnic origins. Through my writing, I wish to inform readers that these things do not matter, but only your deeds and how you behave.