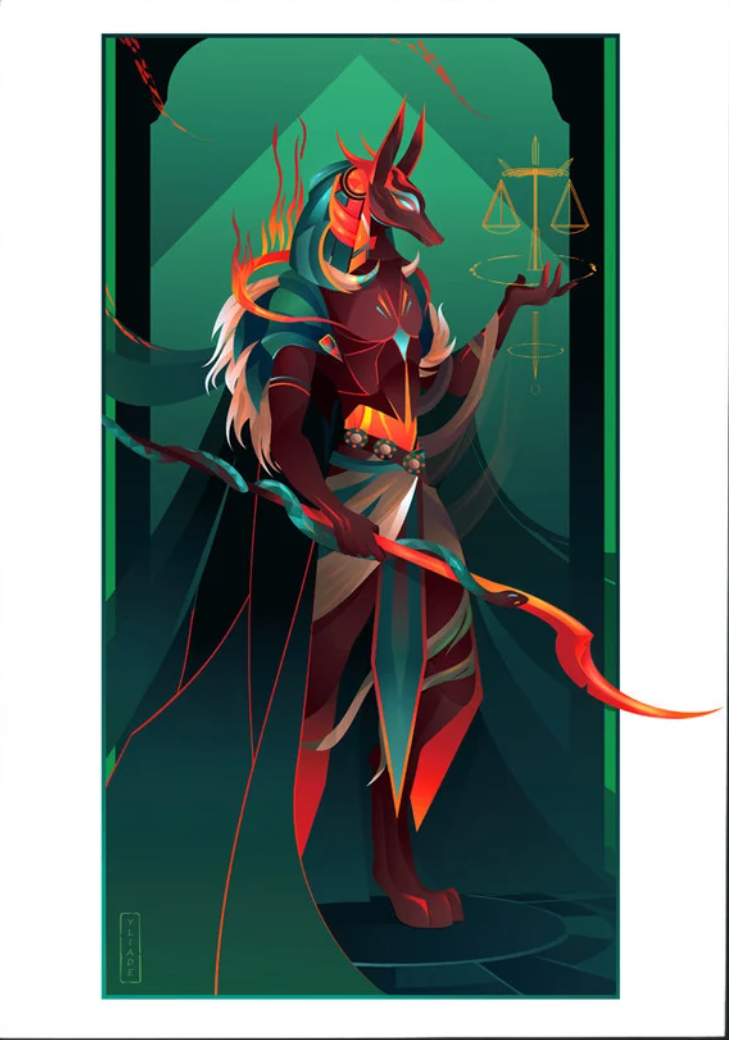 As we approach Samhain we reflect upon the nature of death, and while our experiences today are very different from the experiences of our ancestors, who worshiped and venerated different figures associated with death and the afterlife. The deities and figures associated with death depend on culture and religion. When it comes to these figures and what they represent vary from preparing the dead for the afterlife, the underworld itself and rebirth or resurrection, and are known as deities. There is a term that is also used alongside deities is ‘Psychopomp’ – psychopomps are spirits, angels or deities which guide a soul of the recently deceased to the afterlife. Anubis, Charon, Hermes, the Valkyries, and Yama are examples of psychopomps.

Death is often perceived as a personified figure known as the Grim Reaper, a skeletal being wearing robes who carries a scythe. Depending on the origin the Grim Reaper is the cause of a person’s death by “reaping” the soul; or it comes to collect the soul of the already deceased. Traditionally figures associated with death tend to be male, but there are always exceptions like Sante Meutre from Mexico.

In the Abrahamic monotheistic religions, GOD is the master of life and death, but occasionally an ‘Angel of Death’ is referenced, and possibly the most famous account would be from the Ten Plagues of Egypt, but other angels are mentioned as well. Abaddon, Azreal, Archangel Gabriel, Samael and Michael to name a few.

However, in Polytheistic religions across the world and through history are littered with figures who are associated with death, the afterlife, and the actual underworld. In Norse and Greek mythology there is a trinity of female figures that are assigned the responsibility of determining a mortal’s fate… but they also were feared by many of the gods. In Norse mythology these women were called the Norns and resided at the base of Yggdrasil tending to the world tree. In Greek mythology these figures were known as the Moirai, for the Fates.

Let’s take a quick look at different figures and deities that are associated with death.

Anubis – Egyptian – This is the jackal headed God who is associated with mummification and dictated the fate of the soul. He would weigh the deceased person’s heart against a feather [that represented Ma’at] to dictate whether the soul would ascend to the afterlife.

The Morrigan – Celtic – The Morrigan is a “great warrior queen” and goddess that is most associated with war and death. It is said she dictated who died on the battlefield, and who would survive.

Yama – Hinduism – Yama is said to have been the very first man to die, and due to this he became known as a god of the dead. He is believed to preside over the resting place of the dead.

Freya – Norse – Freya is the Norse goddess who is associated with love, fertility, battle, and death. She is the host of Sessrumnir, where she receives those who have been slain in battle, much like Odin does in Valhalla.

Ammit – Egyptian – Ammit was the creature who had the head of a crocodile, the front end of a lion and the back end of a hippopotamus – these were all animals that were feared during this period. Ammit was the beast who would devour those not worthy to enter the afterlife.

Arawn – Welsh – Arwan is the Welsh/Celtic god of Death and is the ruler of the realm named Annwn, which is also referred to as the Underworld, or Otherworld. He is a figure that strikes fear into mortals.

Hel – Norse – Hel (or Hella) is believed to preside over an underworld realm of the same name at the base of Yggdrasil. It’s believed that those who died in battle that didn’t go to Valhalla or Sessrumnir went to Hel. She also has the honor [or not] of being a daughter of Loki.

Baron Samedi – Haitian – Baron Samedi is known as the Spirit of Death, who ensures that the dead stay where they are meant to and stay dead. He is associated with death, tombs, gravestones, and cemeteries.

Mictlantecuhtli – Aztec – Mictlantecuhtli is the Aztec God of Death, he is also known as the “lord of the Land of the Dead”. He ruled over Mictlán – the Aztec Underworld – with his wife Mictecacíhuatl

Izanami – Japanese – Izanami is the primordial Japanese goddess of both creation and death. While she was giving birth to the Fire God, she sadly burned to death and went to the land of the dead, where her beloved searched for her, but she asked him never to look upon her… he did and saw a rotting corpse. Her husband ran from her and sealed the entrance to the underworld with a large rock. While her husband became the God of the Living, she became the Queen of the land of the dead.

Kali – Hinduism – Kali is a powerful goddess in Hinduism who is associated with death, doomsday, time, violence, and sexuality; she is also the wife of Shiva.

These are just a few of the gods, goddesses and other figures that associate with some aspect of death. There are so many more that I could add like the Shinigami, Pluto, Thanatos, Nephthys, Donn, Ran, Februus… and the list goes one and on.