Hestia: The Greek Goddess of the Hearth 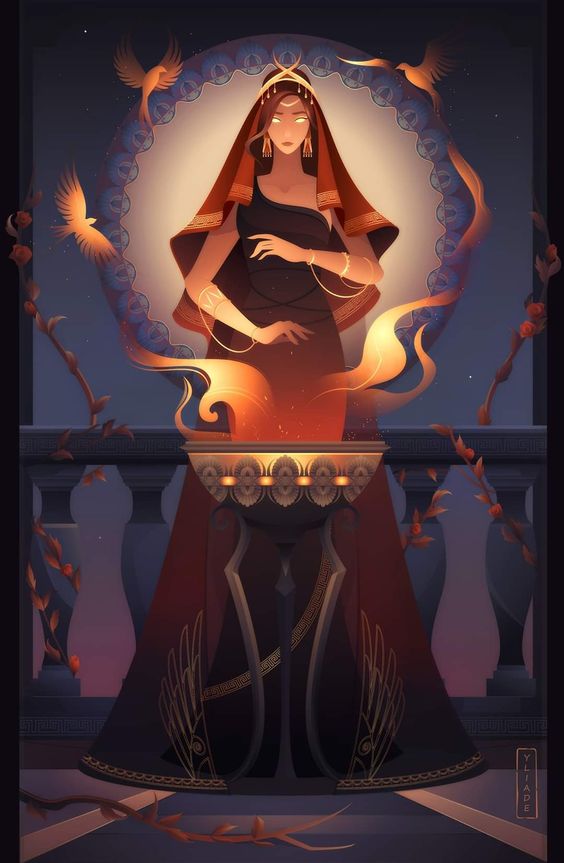 Hestia is a goddess from Ancient Greece that is largely overlooked, in favor of other more popular and well-known goddesses. Although she is widely worshiped she is neglected in the pantheon.

Hestia was the eldest child of Cronus and Rhea, and was subsequently swallowed by her father. Hestia was the first born, and the first to be swallowed. Demeter, Poseidon, Hades and Hera all followed Hestia. When Zeus forced his father to regurgitate his children: Hestia was the last to be expelled, leading her to be both the oldest and youngest child.

Hestia was the goddess of the Hearth, Home, Architecture, Domesticity, the Family and the State. She was one of the three virgin goddesses along with Artemis and Athena. Poseidon and Apollo wished to court her though she made a vow to Zeus that she would remain pure and untouched by a man. Zeus agreed and she became off limits to all.

Although she was the most widely worshiped goddess in Ancient Greece, she did not have any temples dedicated to her. Because she was the Goddess of the Hearth, she was personified as a fire burning in every hearth of the homes around Greece. Hestia would receive the first offering at every sacrifice in the home. Families would put sweet wine in her name and dedicate the best and richest food for her.

The fire in the hearth of each home was not allowed to go out, unless it was ritually extinguished. Even though she didn’t have a cult or temple she was worshiped at any temple; regardless of who it was dedicated to. Some towns would have an outdoor fire burning in their communities that were dedicated to Hestia, for the community as a whole, not an individual home or family. When new towns were founded, one of the public fires would be taken to bless the new town in honor of Hestia. When a child was born, they would be welcomed into the family/community by presenting the child to Hestia’s Hearth

Hestia was said to be the gentlest of the Olympian family of gods, she was kind, forgiving, passive and non- confrontational. Many think of her as bland, colorless and flavorless because there is not much written about her character. Hestia was a virgin goddess; she never had any offspring, though many believed she would have made a great mother.

As a Pantheist, I tend to venerate and worship the divine in broader aspects like Divine Masculine and Divine Feminine and the pantheons of deities are facets of each greater force, that being said in my home I have special altars and places for two goddesses. Bastet (I have cats that have transitioned and are alive) and Hestia. I think she has always had a place in my home, and I have always thanked her for the roof, warmth and joy that has filled my home. I have recently started gathering things that are sacred to Hestia to create an altar in the kitchen, as that has always been seen as the heart of the home – especially in antiquity when the hearth fire was the center of the home.

One of the most prominent things I ask Hestia for is protection of my Hearth and Home with the sacred fire. In the past I have even asked her to reinforce my own personal boundaries in complicated relationships at work and personally. For me, Hestia is that feeling when you get home after a long hard day and you just sink into the comfort of the sounds and smells of home.

Hestia has two counterparts: in Rome she is Vest and in Egypt she is Anuket.

The 31st of December is the Festival of the Hearth fire, which is sacred to Hestia.

Sacred Trees from Around the World